A team of Australian motorcycle enthusiasts is preparing to take on international rivals this week with an artificially intelligent helmet one of its founders has described as Knight Rider’s KITT for your head.
The helmet, which will be able to warn riders about hazards, traffic jams and police speed traps, or offer the best routes based on the rider’s level of experience, will launch in Australia this week in limited numbers but is expect to sell out within days.

And American fans of the company are reportedly already “frustrated” as the smart product will only be available in Australia.
The Forcite MK1 will be the second smart helmet from the Sydney start-up firm, which launched an intelligent ski helmet in 2015.
But industrial designer Alfred Boyadgis said the latest creation meant more to the start-up as everyone in the team rode a motorcycle and the product would come five years after a bike accident in which he broke his kneecap in three places.

Forcite is all about seeing things before they happen,” he said. “If I had seen that oil slick, the accident wouldn’t have happened.
“Imagine you could get up in the morning, put this helmet on your head, and scan the entire area around you for alerts.”
The Forcite MK1 helmet will feature a built-in camera that turns on when it senses movement, speakers, and an array of lights at the base of the helmet its makers call RAYDAR.
Rather than using a heads up display (HUD) like Google Glass or a fighter jet, which Mr Boyadgis called a “dangerous distraction,” these lights will glow different colours depending on the warning. An oil slick alert could be orange, for example, while red and blue lights could warn of a police presence.
An Australian start-up will launch an artificially intelligent motorcycle helmet, the Forcite MK1, to help riders avoid hazards. Picture: Supplied
The smart helmet would also announce the hazards ahead, and riders could submit their own information using a button on the connected handlebar controller.
“The helmet’s software will scan 1000 different sources of information for alerts,” Mr Boyadgis said.
“The idea is to keep your eyes on the road but make sure you know everything about the road.”
Artificial intelligence in the helmet’s software would also suggest routes based on the rider’s experience, he said, keeping rookies out of traffic, while suggesting winding roads for experienced riders.
A limited number of the Forcite MK1 will go on sale this week. Picture: Supplied
A limited number of Forcite MK1 smart helmets will go on sale to members of its Facebook test group this week for $799, but Mr Boyadgis said the company expected a sellout within days. A wider launch is due early next year.
The Sydney company will go up against powerful international competition, however, with American firm Skully Technologies back from bankruptcy and promising to ship its long-awaited smart helmet with HUD later this year.
The company has also promised to deliver the $US1800 helmets to backers of its 2014 crowd-funding campaign that have yet to see a return on their investment. 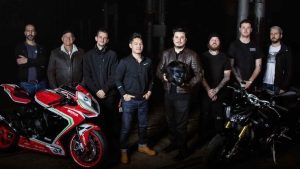