December 15, 2020  SYDNEY & IRVINE, Calif–Morse Micro, an Australian start-up reinventing Wi-Fi for the Internet of Things (IoT), today announced that it has been named a CES® 2021 Innovation Awards Honoree for its Wi-Fi HaLow technology in the Embedded Technologies category. The CES Innovation Awards is an annual competition honoring outstanding design and engineering in consumer technology products. Morse Micro Wi-Fi HaLow will be on display at the CES website and during the all-digital CES from January 11-14, 2021.

“The ultra-long range and massive capacity of our Wi-Fi HaLow technology along with its ultra-low-power is a game changer for the IoT.”

“The ultra-long range and massive capacity of our Wi-Fi HaLow technology along with its ultra-low-power is a game changer for the IoT,” said Michael De Nil, co-founder and chief executive officer at Morse Micro. “We are thrilled that our chip is being recognized as the best in innovation by CES for its design and engineering attributes in the embedded technologies category, and even more excited about what lies ahead.”

Winning the 2021 CES Innovation Award culminates a tremendous end of year for Morse Micro. The company announced an additional new funding round in November and was recently named 2020 Best Wi-Fi Startup and the Best Wi-Fi IoT Product for its Wi-Fi HaLow 802.11ah solution at the 2020 Wi-Fi NOW Awards. 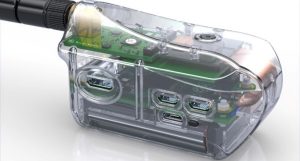 About the CES Innovation Awards
The CES Innovation Awards program, owned and produced by the Consumer Technology Association (CTA)®, is an annual competition honoring outstanding design and engineering in consumer technology products across 28 product categories. An elite panel of industry expert judges, including members of the media, designers, engineers and more, reviewed submissions based on engineering qualities, aesthetic and design, functionality and consumer appeal.

About Morse Micro
Morse Micro is a fast-growing wireless integrated circuit solutions company that is reinventing Wi-Fi for the Internet of Things (IoT). The company was founded by Wi-Fi pioneers and innovators, Michael De Nil and Andrew Terry, joined by the original Wi-Fi inventor Prof. Neil Weste and wireless industry veterans, whose teams designed Wi-Fi chips into billions of smartphones. Headquartered in Australia with offices in China and the U.S., Morse Micro’s strong and diverse system team, portfolio of IP and patents, enables Wi-Fi HaLow connectivity across the complete IoT ecosystem, from surveillance systems and access control to industrial automation and mobile devices, allowing connected devices to reach farther. www.morsemicro.com

About Uniseed
Formed in 2000, Uniseed is Australia’s longest running university commercialisation fund. Uniseed has supported a number of highly successful companies arising from partner research organisations, such as the University of Melbourne’s Fibrotech (sold to Shire in 2014) and Hatchtech (sold to Dr Reddy’s Laboratories in 2015); the University of Queensland’s Spinifex (sold to Novartis in 2015); and the University of NSW’s Smart Sparrow (sold to Pearson in 2019) and Exonate (major research collaboration with J&J announced in 2020). Uniseed is a mutual fund, owned by research organisations, for research organisations. The fund facilitates the commercialisation of its research partners’ most promising intellectual property and secures targeted investment in resulting products and technologies. For more information, visit: www.uniseed.com